Tesla garners as much media attention as do the Big Five of the digital economy—Apple, Alphabet, Microsoft, Amazon, and Facebook. Tesla’s valuation now exceeds those of major U.S. automakers, and is now positioned to compete in the highly contested category of mid-to-upper priced vehicles. But the resurgence of electric vehicles (EVs) is not just an American phenomenon. It is an even bigger story in a few other countries. Here are a few recent developments.

EXPLOSIVE GROWTH: Clearly, the automotive industry is in the midst of a massive transformation. It is still a long way to go since EVs account for less than 1% of global sales. Americans bought 159,000 EVs in 2016, 38% more than the previous year[ii]. At the end of 2016, there were less than 600,000 electric cars, including hybrids, in the U.S., less than 0.25% of all cars on the road. But the consumer demand is starting to shift in favor of electrified vehicles. According to McKinsey[iii], 30%-45% of vehicle buyers in the US and Germany consider an EV purchase though very few actually choose EVs over traditional vehicles. Buyers still have significant concerns regarding driving range, lack of recharging infrastructure, high cost of vehicles, and even longevity and safety of batteries. 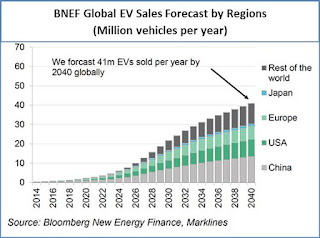 Major automakers are responding to shifting consumer tastes. Volvo has announced that it will roll out five battery electric car models and convert all internal combustion engines to plug-in hybrids between 2019 and 2021. Mercedes and BMW will soon have four electric cars each, and Volkswagen will have seven — three from Audi, two from Porsche and one Bentley. Maserati, Jaguar and Aston Martin have also announced to launch electric cars. There are over a dozen models in the U.S. where Chevy And, in China, Tesla’s Model S and X cars compete with 19 Chinese electric vehicle models!

POLICY INCENTIVES: Given the high cost of EVs, their sales respond strongly to government incentives. Robust policy support has helped push the worldwide share of Chinese OEMs to 43% in 2016, followed by 23% and 17% respectively for Germany and the U.S. Contrary to popular belief, however, China does not the offer the largest subsidies; the top three subsidizers are South Korea, Denmark, and Norway. The total monetary subsidies in these countries and in China add up to well over $15,000 per vehicles. In the U.S., the discounts add up to about $10,000. As a proportion of the price of a typical midsize car, these subsidies can range from a high of 49% in Denmark to 23% in China and 18% in the United States.

Of course, price subsidies are not enough to ensure mass adoption. Investment in EV-charging infrastructure is critical. China is in the lead; EV-charging outlets more than doubled last year to 107,000. Japan and the Netherlands have also been building large numbers of EV charging stations, while progress has been slower in countries like France, Germany, the UK, and the U.S. 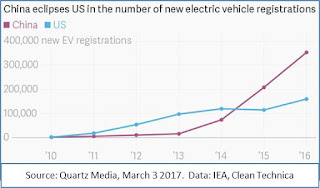 MARKET TRENDS: Competition and scale economies are spurring activity across the industry. Pretty much every single major auto manufacturer is already selling electric cars now, and they all watch the rise of Tesla with trepidation. Since EV engines and drive trains are mechanically less complicated, industry observers forecast a rapid commoditization, intensified competition and price erosion across the industry. Competitive pressure will be further intensified by the rising heft and experience of the Chinese automakers. This is bad news for the industry; EV producers are losing money today and profits may be elusive for quite some time.

On the other hand, some industry observers describer EVs as computers on wheels. According to them, competitive advantage will belong to companies that excel in computer technology, software and artificial intelligence. If they are right, the Ford’s and GM’s of the world that are playing catch up Tesla today will be doing so for many years. However, if the last two decades are any indication, we should expect quickly narrowing performance gaps between different EV manufacturers. The advantage will go to those who offer superior brands, costs, user interface and fully integrated customer experience.

If these predictions hold up, there will be 530 million EVs in the world in 2040, accounting for one-third of all vehicles on the road. Oil and gas companies such as Exxon Mobil and BP, whose businesses will be sharply affected by EV evolution, are forecasting 100 million EVs by 2040. Interestingly, OPEC takes a more aggressive view, predicting 266 million EVs in 2040[vi]. 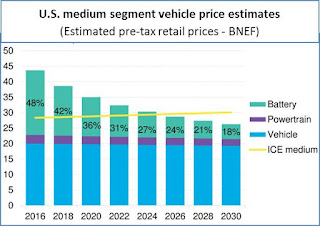 Policymakers are also taking bold stance on the growth of the EV market. The Paris Declaration on Electro-Mobility and Climate Change and Call to Action, developed in the framework of the Lima-Paris Action Agenda and announced at COP21, calls for the global deployment of 100 million electric cars by 2030[vii] (UNFCCC, 2015b). The 2DS of the IEA ETP 2016 sets a deployment target for electric cars exceeding the goal of the Paris Declaration: 140 million by 2030, and nearly 900 million by 2050. Regardless of who is right, we can be certain that an astounding transformation is anticipated – one that will far eclipse the last one involving the transition of the trucking fleet from gasoline to diesel in the early 70s.

LI-ION BATTERIES: Besides government policy and infrastructure support, another major driver of growth is the battery cost. The batteries account for more than a third of the cost of an EV today, according to BNEF (see the nearby chart). This is despite the price decline of lithium-ion battery packs from $1,000 per kilowatt-hour in 2010 to less than $300 today. BNEF forecasts pack-level prices will be under $100 by 2026, allowing electric cars to reach price parity with ICE vehicles.

From the vantage point of WAVE Equity Partners, we see multiple technology trends to support such optimism in improved cost of Li-ion batteries. Lionano, one of our portfolio companies, is providing a significant leap by supplying cathode materials that improve energy density of lithium-ion batteries by 50% compared to those produced by leading battery manufacturers today. In another two years, we also expect mass commercialization of solid state electrolytes. These developments will not only allow the batteries to pack more energy, but also make them inherently safer and cheaper. Over longer time horizon of 5 to 10 years, additional technology strands including nanotechnology, graphene, and alternative chemistries such as lithium-sulfur will continue to drive the transformation of the EV industry.